Given Below are some repeated questions from the past papers of FPSC for different jobs. These questions are very important because they have been repeated more than twice in the previous exams of FPSC. 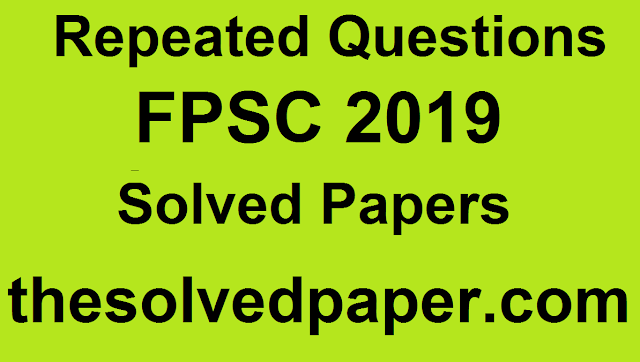 3.    Which one of the following is the oldest Barrage on Indus River?
a)    Guddu Barrage
b)    Sukkur Barrage
c)    Ghulam Muhammad Barrage
d)    Taunsa Barrage

6.    To create a table of columns and rows for statistical or mathematical calculations using a spreadsheet, which software is used?
a)    Excel
b)    Word Pad
c)    Word Perfect
d)    Corel Draw

9.    Who was the Prime Minister of Pakistan at the time of its rejoining of Commonwealth in 1989?
a)    Mian Mohammad Nawaz Sharif
b)    Shaukat Aziz
c)    Benazir Bhutto
d)    Malik Meraj Khalid

11.  In the second Constituent Assembly elected in 1955, the Muslim League formed a coalition Government with:
a)    United Front
b)    Noon Group
c)    Independents
d)    None of these

15.  The 1970 elections in Pakistan were originally scheduled to be held in October but had to be postponed to December. What was the reason for this postponement?
a)    Six points of Sheikh Mujib
b)    Riots in Lahore, Karachi, and Rawalpindi
c)    The killing of West Pakistanis by Mukti Bahini
d)    Floods and Cyclone in East Pakistan